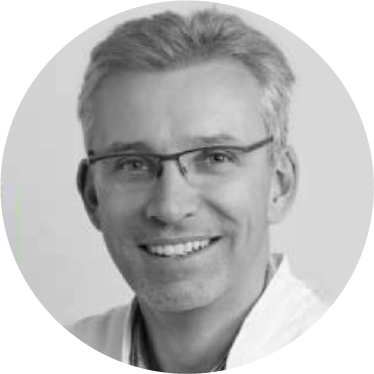 Prof Dr Renner completed his M.D. at the Medical School of the University of Cologne, Germany in 1993. He then trained in Internal Medicine at the University Hospital Saarland where he received his board certification in Oncology/Haematology in 2001. His special area of expertise is primarily within Haematology and Lymphoma, including high-dose chemotherapy and autologous stem cell transplantation. In 2004, he was appointed Professor of Immune and Gene Therapy at the University Saarland and moved to the University Zurich, Switzerland, in 2005, where he held different appointments until December 2012. His latest appointment was head of the Department of Internal Medicine and Oncology, head of the cancer centre and Professor for clinical and experimental oncology at the University of Zurich. Prof Dr Renner joined the Swiss Tumor Institute (STI) in January 2013 and started the Cancer Centre initiative at Clinic Hirslanden, the largest private hospital group in Switzerland. He is currently the chair of the Cancer Centre, the head of the Haematology and Lymphoma Unit and programme director for cellular therapies including stem cell transplantation and CART-cells. He is Professor for Medical Oncology at the University of Basel.

Prof Dr Renner has published over 110 articles and reviews in scientific journals. He has also contributed chapters to a dozen cancer-related textbooks. His lab interests are mainly on antibody development and new immunological approaches for cancer treatment. He has a strong background in translational research and served as Pl for national and international phase I to phase Ill trials in Haematology/Oncology. He is a member of different research organisations and served on the board of the Swiss Group for Clinical Cancer Research until the end of 2013. In addition, he serves on the scientific advisory board of various biotech start-ups and is a co-founder of lmmunOs Therapeutics AG and Dayton Therapeutics AG.